The i18n system of Docusaurus is decoupled from any translation software.

You can integrate Docusaurus with the tools and SaaS of your choice, as long as you put the translation files at the correct location.

We document the usage of Crowdin, as one possible integration example.

This is not an endorsement of Crowdin as the unique choice to translate a Docusaurus site, but it is successfully used by Facebook to translate documentation projects such as Jest, Docusaurus and ReasonML.

Refer to the Crowdin documentation and Crowdin support for help.

Use this community-driven GitHub issue to discuss anything related to Docusaurus + Crowdin.

Crowdin is a translation SaaS, offering a free plan for open-source projects.

We recommend the following translation workflow:

Crowdin provides a CLI to upload sources and download translations, allowing you to automate the translation process.

The crowdin.yml configuration file is convenient for Docusaurus, and permits to download the localized translation files at the expected location (in i18n/<locale>/..).

This is a walk-through of using Crowdin to translate a newly initialized English Docusaurus website into French, and assume you already followed the i18n tutorial.

The end result can be seen at docusaurus-crowdin-example.netlify.app (repository).

Add the site configuration for the French language:

Use English as source language, and French as target language. 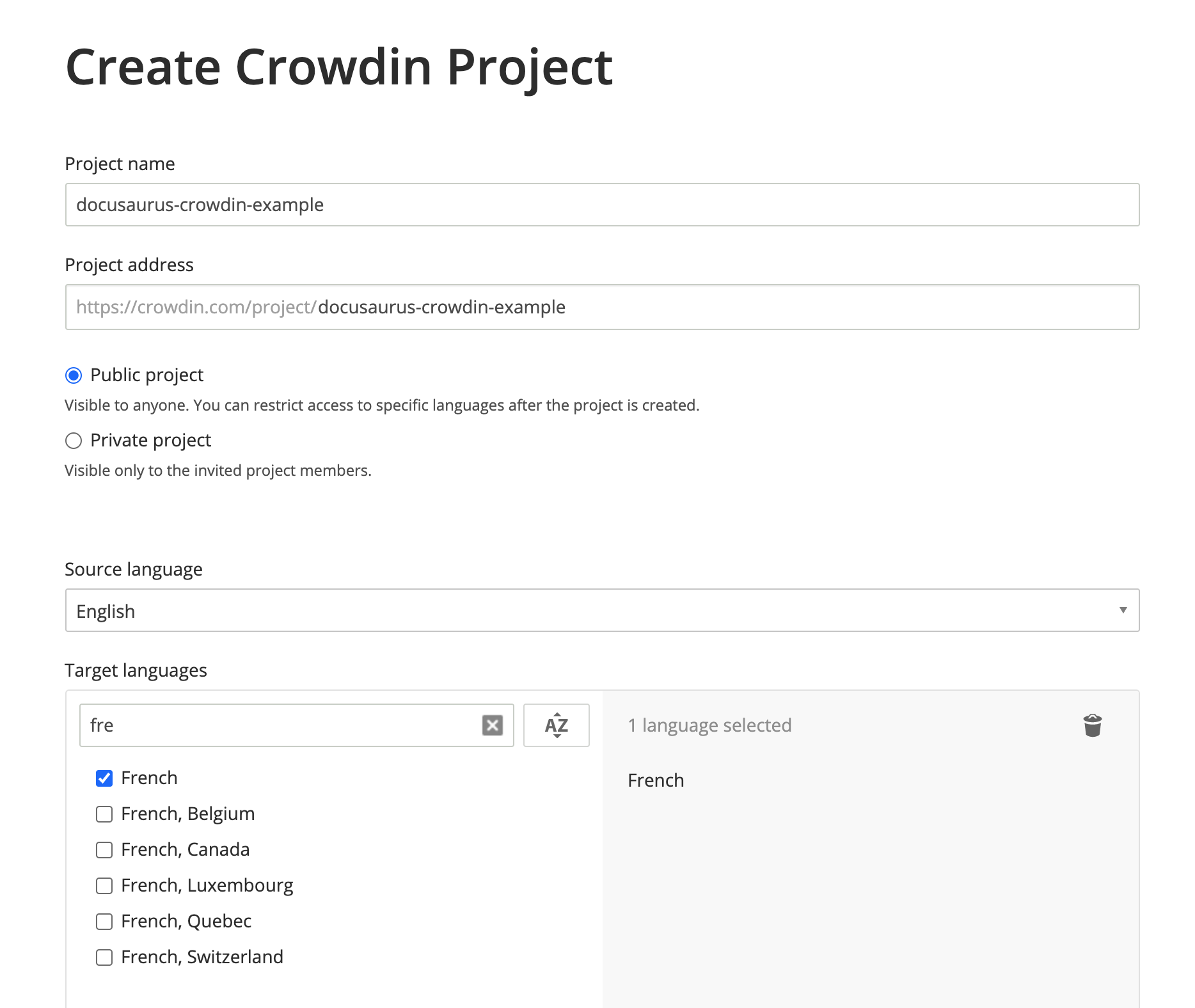 Your project is created, but it is empty for now. We will upload the files to translate in the next steps.

This configuration (doc) provides a mapping for the Crowdin CLI to understand:

Crowdin has its own syntax for declaring source/translation paths:

The Crowdin CLI warnings are not always easy to understand.

The api_token_env attribute defines the env variable name read by the Crowdin CLI.

You can obtain a Personal Access Token on your personal profile page.

You can keep the default value CROWDIN_PERSONAL_TOKEN, and set this environment variable and on your computer and on the CI server to the generated access token.

You should not commit it, and it may be a good idea to create a dedicated Crowdin profile for your company instead of using a personal account.

This tutorial use the CLI in version 3.5.2, but we expect 3.x releases to keep working.

Install the Crowdin CLI as a NPM package to your Docusaurus site:

Test that you can run the Crowdin CLI:

Set the CROWDIN_PERSONAL_TOKEN env variable on your computer, to allow the CLI to authenticate with the Crowdin API.

Generate the JSON translation files for the default language in website/i18n/en:

Upload all the JSON and Markdown translation files: 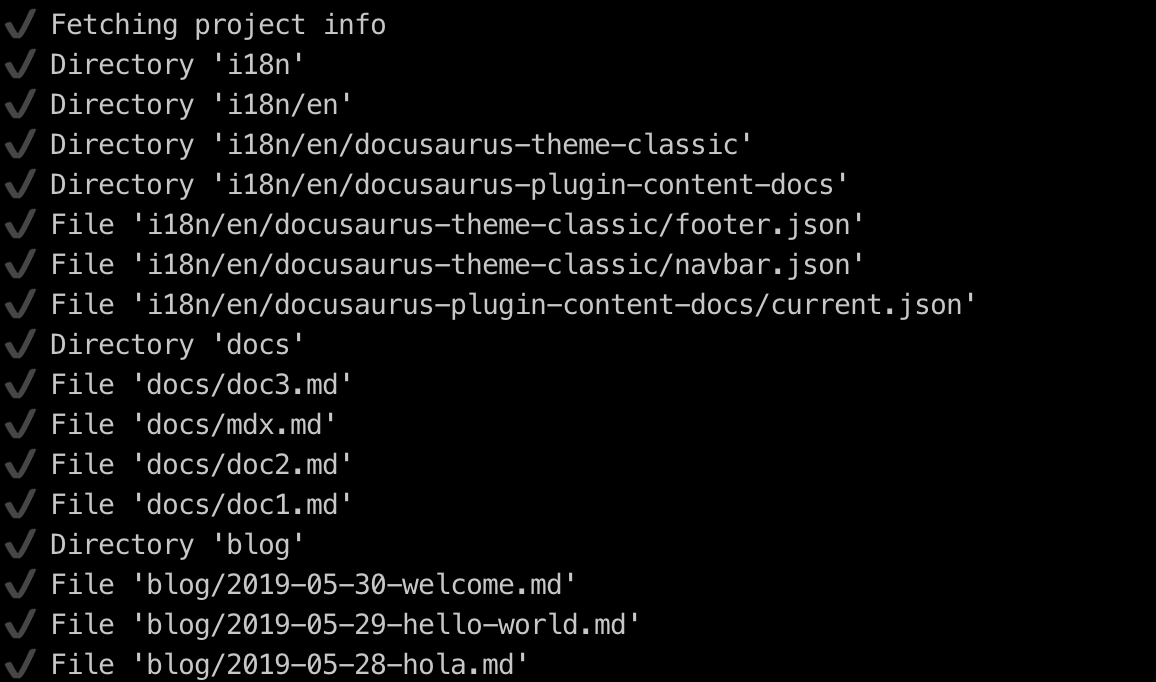 Your source files are now visible on the Crowdin interface: https://crowdin.com/project/<MY_PROJECT_NAME>/settings#files 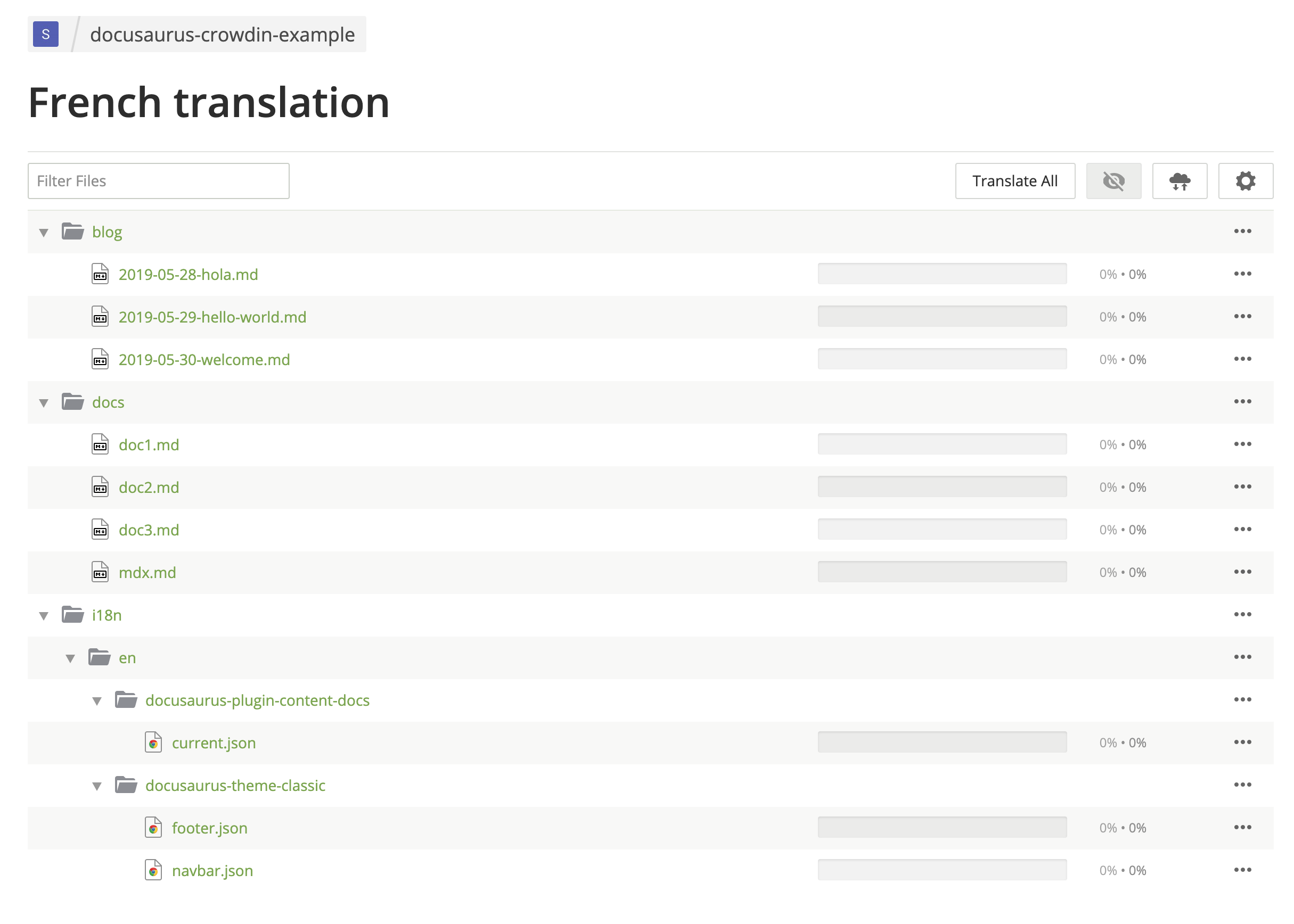 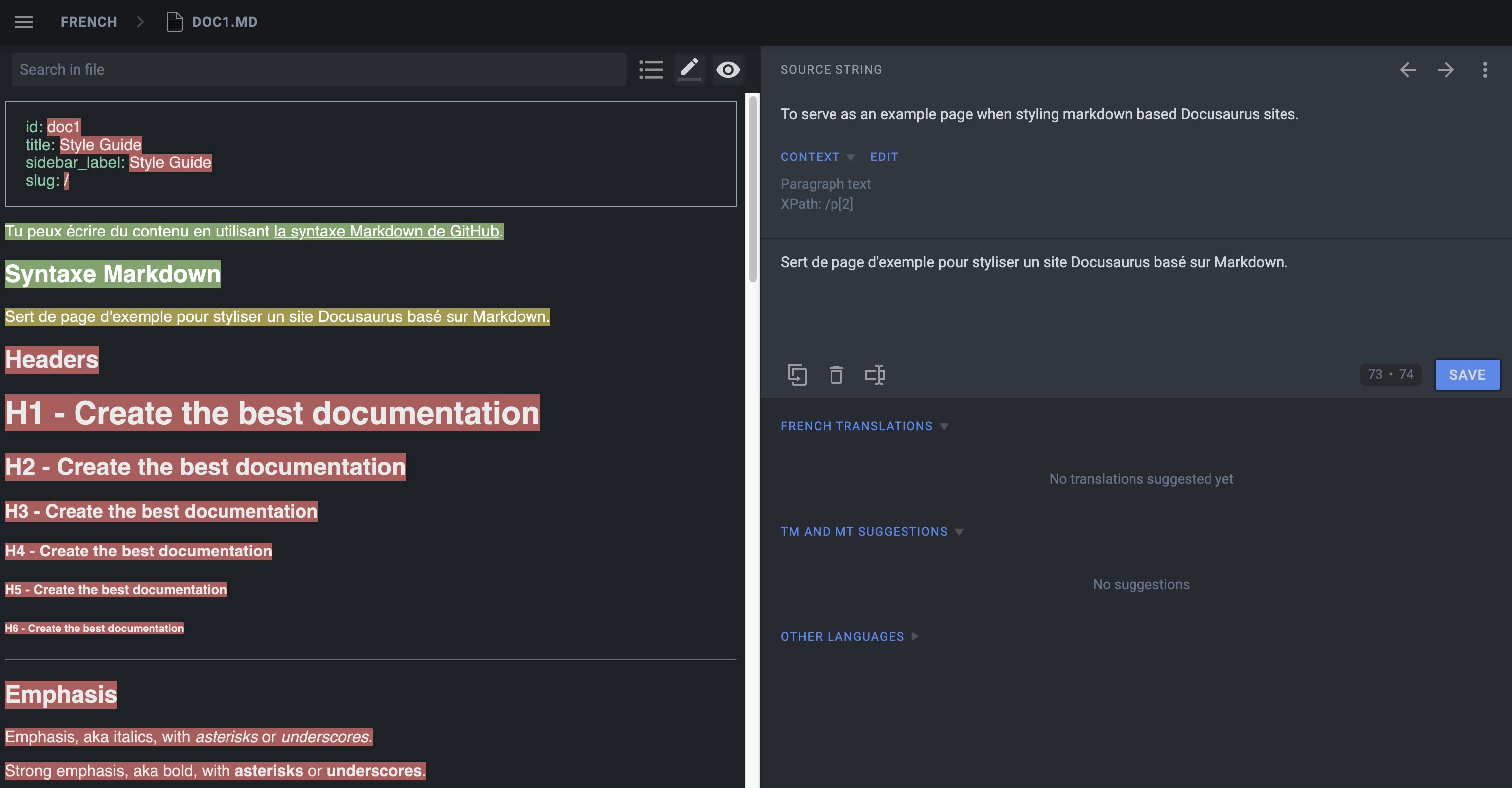 Use Hide String to make sure translators don't translate things that should not be: 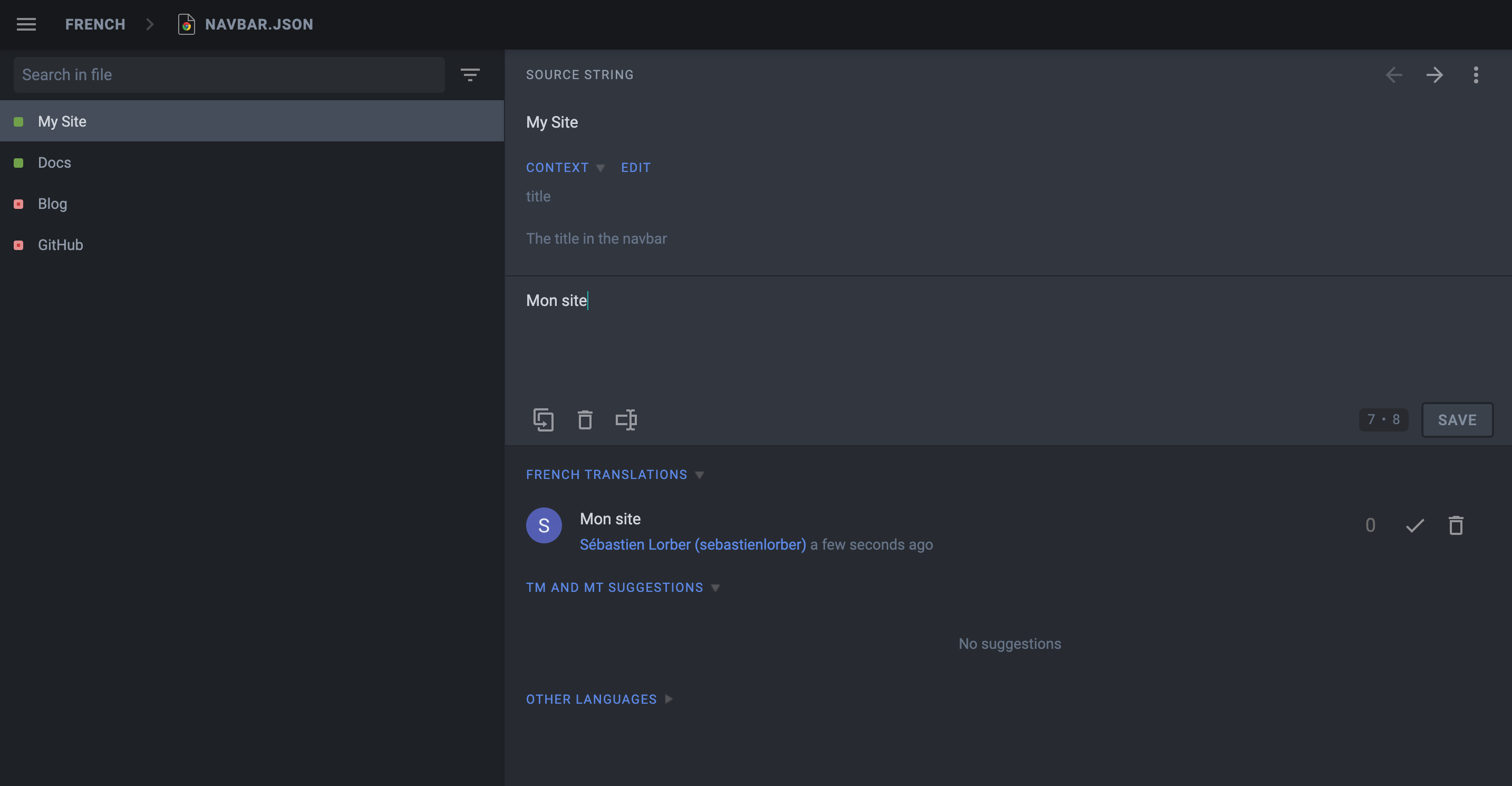 The description attribute of JSON translation files is visible on Crowdin to help translate the strings.

Use the Hide String feature first, as Crowdin is pre-translating things too optimistically.

Use the Crowdin CLI to download the translated JSON and Markdown files.

Start your site on the French locale:

Make sure that your website is now translated in French at http://localhost:3000/fr/.

We will configure the CI to download the Crowdin translations at build time, and keep them outside of Git.

Set the CROWDIN_PERSONAL_TOKEN env variable on your CI.

Call the npm run crowdin:sync script in your CI, just before building the Docusaurus site.

Crowdin does not support well multiple concurrent uploads/downloads: it is preferable to only include translations to your production deployment, and keep deploy previews untranslated.

Pay special attention to the JSX fragments in MDX documents!

Crowdin does not support officially MDX, but they added support for the .mdx extension, and interpret such files as Markdown (instead of plain text).

Crowdin thinks the JSX syntax is embedded HTML, and can mess-up with the JSX markup when you download the translations, leading to a site that fails to build due to invalid JSX.

More complex JSX fragments using object/array props like <User person={{name: "Sebastien"}}/> are more likely to fail due to a syntax that does not look like HTML.

When creating a new version, the source strings will generally be quite similar to the current version (website/docs), and you don't want to translate the new version docs again and again.

We recommend using Hide, but the ideal setting depends on how much your versions are different.

Not using Hide leads to a much larger amount of source strings in quotas, and will affect the pricing.

You need to configure translation files for each plugin instance.

If you have a docs plugin instance with id=ios, you will need to configure those source files as well

Sometimes, you will remove or rename a source file on Git, and Crowdin will display CLI warnings:

When your sources are refactored, you should use the Crowdin UI to update your Crowdin files manually:

We recommend avoiding them.

It could have been helpful to be able to edit the translations in both Git and Crowdin, and have a bi-directional sync between the 2 systems.

In practice, it didn't work very reliably for a few reasons:

Crowdin has an In-Context localization feature.

Unfortunately, it does not work yet for technical reasons, but we have good hope it can be solved.

Crowdin replaces markdown strings with technical ids such as crowdin:id12345, but it does so too aggressively, including hidden strings, and mess-up with the frontmatter, admonitions, jsx...

When the user is browsing a page at /fr/doc1, the edit button will link by default to the unlocalized doc at website/docs/doc1.md.

You may prefer the edit button to link to the Crowdin interface instead, and can use the editUrl function to customize the edit urls on a per-locale basis.

It is currently not possible to link to a specific file in Crowdin.

The Docusaurus v2 configuration file is a good example of using versioning and multi-instance: